What Would You Do If Your Characters Came to Life?

What readers are saying:

"The Heroic Adventures of Madame X has the grit and the journey that draws so many into the comic book world, but with the benefit of being a novel that shows both the comic's adventure and the creator's...it takes on some interesting explorations and I can definitely see comic fans diving into this and asking for more." 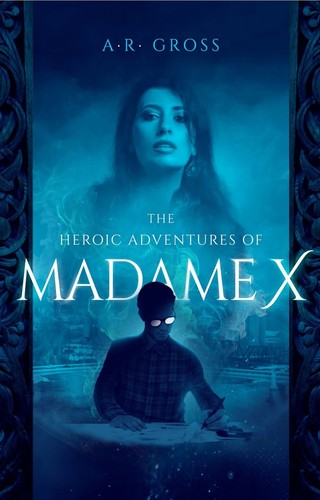 Here's a bonus story from:

STOLEN GRIEF AND OTHER STORIES, A CHAPBOOK BY A. R. GROSS

On Monday, from an interior pocket of my leather purse, I withdraw a perfume bottle containing my latest lover, Philip, and set it on my desk at Soho Gallery where I work as a receptionist.

My beautiful though klutzy boss, Monique de Andredi, hikes up her tight gray linen skirt and sits on the edge of the desk, knocking over the bottle. It plunks against the plywood and upsets the paperclip holder.

I move to straighten it, but a whimper emanates from the bottle.

Philip rubs the back of his head with both palms. He scrunches his eyes shut and rubs his eyes with doll-like fists.

Feeling nervous and a bit sorry for him, I bring the bottle to my lips and kiss Philip through the glass.

"What is that?" Monique plucks the bottle from my fingers. As she examines the miniature wonder, she widens her eyes. "Do you have others?"

"Bring them." Monique wags her fingers until I place the bottle in the palm of her hand. "I need an exciting piece to stir up some controversy." She holds Philip in an otherwise empty White Shoulders bottle and examines the miniature man for imperfections.

He presses his hands against the glass like a struggling beetle, slipping in his futile attempts at escape. After a while, he surrenders, slides to his knees, and sobs. Glistening drops of water create an iridescent rainbow in the fragmentary light of the bottle.

Monique smiles. "Is he a good nude?"

Monique lifts the crystal plunger and waves the bottle under her nose.

"Let me out," a tiny voice shouts. Hands reach up as the plunger thrusts down.

"I'm not an artist," I say. My collection of men began thirteen years ago when I responded to an advertisement in Women's World:  "Can't get rid of him? Shrink him to fit. One size fits any ego." On a whim, I purchased a bottle of the clear green elixir for $19.95 + shipping and handling, New York residents add sales tax. Three drops into a glass of rum and Shazam! a six-foot man becomes two inches.

"You are now." Monique pockets the bottle and nods toward the customers entering the gallery. "I want calls to the local papers, online advertising. Post tickets to be sold in advance for May 17 through 21. $25 admission. Cheese and wine served. Caviar extra." She flashes her predatory smile. "I only want your work to be noticed and appreciated." She plunks the container back on my desk.

But she is already gone, sailing through the rows of paintings like a dove with a message.

"Feminist horror at its finest," Jenny Barr, an art critic for the Chronicle writes. "In a shower of still lifes and landscapes, Cara Shipley's three-dimensional miniatures of American working-class men shine with authenticity and authority, putting to rest any fairy tale notions that feminism is dead. A brave debut from a promising artist."

I fold the paper in half before tossing it into the wastebasket under the desk.

Monique lures me into a net of photographers and publicists and motions for the temp from the agency to answer the phones. "I discovered her latent talent," Monique beams. "She's my protege."

In a conclave of oohs and ahhs and false embraces, I shudder. I think of Philip and the others on a silver tray in a display case near the table of hors d'oeuvres.

The critics laugh and tell jokes. Dab three men on for a day. 3-D art with a purpose.

"A small marginal profit," Monique says. "We still have to pay the caterers and the electric bill."

"I never wanted publicity for this," I tell Monique. I gather the remaining 47 bottles into my knapsack.

"What are you doing?" Monique shrieks. "They don't belong to you anymore."

"These aren't for sale." I tuck the knapsack under my arm and head for the door. "I don't care about your stupid show. I quit."

At home, I wrestle with arranging the perfume bottles of my men on the bathroom counter, but every placement reminds me of the show. My stomach twists into knots. I sit on the toilet and weep. Years ago, it used to comfort me to know these men were at my beck and call 24 hours a day, even with my make-up off, my power suit at the cleaners, my last bottle of Merlot gone. Now I no longer want to dab any of their leftover fragrance on my wrists. The novelty is over. I stack the men along my dresser drawer and fall asleep.

At 2 A.M., Marcus taps on the glass. He's smaller than the others, only an inch and a half tall, and his voice squeaks. But, after three years of listening to these men, I hear him loud and clear.

"What is it?" I rub my eyes, stumble out of bed, and turn on the overhead light.

"Thank you." He presses his hands against the glass, his face turned upward toward me.

"For what?" I yawn and stretch.

He sits cross-legged on the bottom of the bottle. "For not selling me like you did to Jim, Bill, and Tony."

"Is that it?" I raise my voice and my eyebrows.

"No, I'm hungry." He crosses his arms over his stomach.

I uncork the bottle.

He tumbles into my palm.

I place him on my shoulder and stare at us, an odd-couple in the mirror above my dresser. I remember stories of Thumbelina, how much compassion the field mouse had for the lost girl who could fit into a walnut shell, and I suddenly realize my indignation with the show's success stems from the world's appreciation of my thoughtlessness.

Marcus clings to my terry cloth robe like a piece of lint.

I step into the kitchen and pour a drop of Guinness into a doll's teacup and set it on the white handkerchief beside a crumb of bread leftover from this morning's toast. "Drink up. It's the last you'll be getting until morning." I place Marcus on a doll's chair my mother made when I was seven, too young to appreciate manual labor, but old enough to respect the chair's function and purpose.

Marcus slumps over the miniature table, gulps down the beer with one swallow, and asks for more. "It gets so lonely in there. I miss holding you."

"That's what you always say." I close the refrigerator door, then open it again and refill his teacup. Marcus was my best lover, the one who would pull back chairs and say "Please" and "Thank you" and not just before and after making love, but all the time. He remembered my birthday and brought me long-stemmed roses for no reason. He was the one who would wait patiently for me to warm up to his love, touching me gently, always heeding my requests, able to take "yes" and "no" for what they were, not what he wanted them to be. But, in the end, he disturbed me with too much attentiveness. He pined for me around the clock. Weary of the depth and purity of his love, I told him I needed space. One week went by and then another before Marcus dared to call. But he did call, late on a Friday night after two weeks of missing me. "I can't stand it anymore," he said. "I've been tracing your name in the shower door and signing my checks Marcus Stanley-Shipley."

"It's over," I said, afraid of dissolving into a puddle of love.

"You said you needed space."

"It was a nice way of wording things." I steeled my back against the wall and closed my eyes. "Good-bye."

He sounded genuine. I shuddered. "Too bad, Marcus."

When he persisted with sending love notes and "Please forgive me" bouquets of daffodils and tulips and passionate radio dedications to "The One I Love," I decided to do what I have always done.

I invited him over for dinner and shrunk him.

Tonight, however, I wish I was small, too. I wish I was as fragile and needy as Thumbelina curled up in a walnut's shell, trying to sleep. Maybe Marcus would lie down beside me, stroke my hair, and remind me I am beautiful.

I eye the clear green elixir on the kitchen counter beside the sink. Three drops, I wonder. Would it work on me?

Email Me
Buy Your Copy Today!